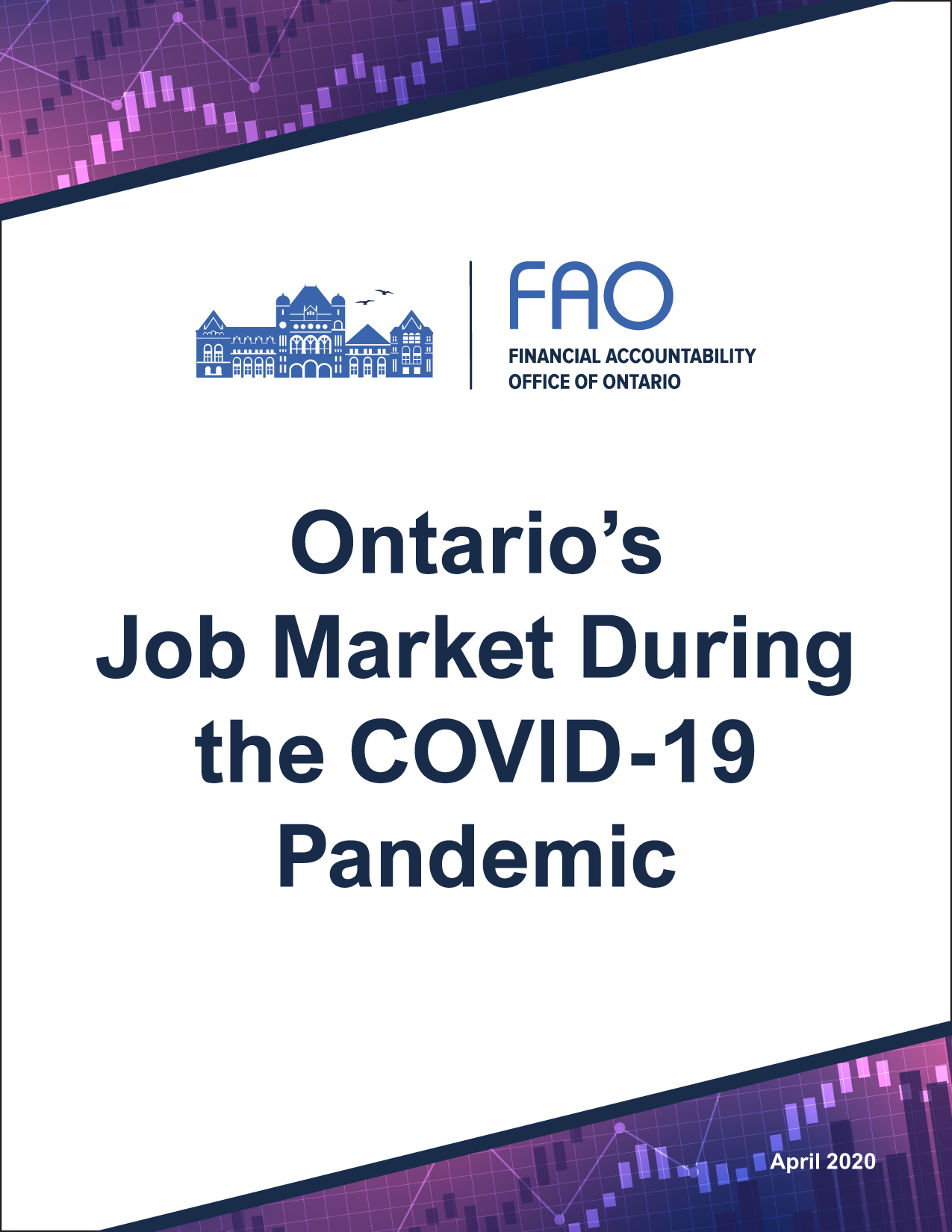 Snapshot of the Ontario labour market in April 2020 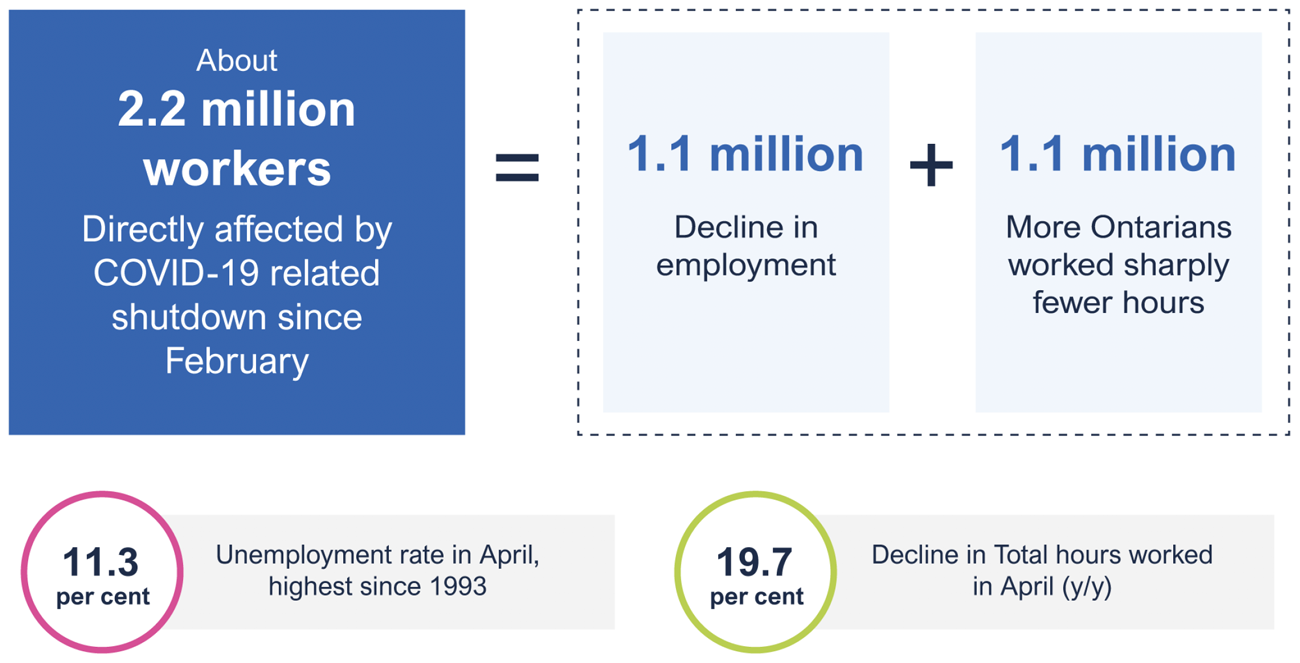 According to Statistics Canada’s Labour Force Survey, Ontario employment fell sharply in April, down a record 689,200 jobs (or -9.6 per cent), bringing the total employment decline since the beginning of the COVID-19 shutdowns to 1.1 million (or -14.5 per cent). With the steep drop in April, total employment in the province is down to levels not seen since late 2009.

As a result of the sharp job loss, Ontario’s unemployment rate jumped to 11.3 per cent in April, up from 7.6 per cent in March. The 3.7 percentage points jump in the unemployment rate was the largest single-month increase on record, bringing the jobless rate to its highest point since June 1993.

The unemployment rate in April would have been even higher, at 15.1 per cent, if many laid-off workers had not decided to give up looking for work because of limited job opportunities. Since February, 706,000 of the 1.1 million who lost jobs decided not to look for employment, lowering the labour force participation rate to its lowest point on record back to 1976.[2] The participation rates for young workers (aged 15 to 24 years) and females posted the largest declines since the beginning of the pandemic.

Almost all (83.3 per cent) of the increase in unemployment was driven by temporary layoffs between February and April. The number of unemployed individuals on temporary layoffs increased almost 26 times in April from a year earlier, the largest increase on record. This development reflects the unique nature of the current economic downturn. Unlike past recessions where lower demand prompted businesses to reduce production, the current economic downturn is the result of temporary, government-directed shutdowns to halt the spread of the virus. The temporary nature of the layoffs also indicates that most employers expect to return to more normal levels of staffing as the economy reopens.

Impact of the COVID-19 Pandemic on Employment

As of April, the FAO estimates that about 2.2 million workers – representing nearly one-third of those employed in February – were directly affected by the pandemic-related shutdowns, through either job losses, temporary layoffs or sharply reduced hours. In addition to the net decline in employment of 1.1 million, the FAO estimates that 934,000 more employees had essentially no hours worked, while a further 144,000 others worked less than half their usual hours, largely due to COVID-19 related reasons.

Vulnerable groups have experienced sharper employment declines during the pandemic shutdowns. Since February, temporary workers experienced job losses at nearly twice the rate (-28 per cent) compared to permanent employees (-14.9 per cent).[3] For young workers (aged 15 to 24 years), many of whom are employed in temporary or part-time positions, employment declined by 32.4 per cent between February and April 2020, almost three times the pace of job losses for workers aged 25 and over (-11.7%). Employment also declined at a faster pace among workers with lower levels of educational attainment.

Since the pandemic shutdowns began, all major sectors have experienced lower employment, with the largest job losses concentrated in industries that pay below-average wages.[4] Lower-paying industries have seen employment drop by 778,100 since February, accounting for seven in 10 jobs lost across the economy.

As the pandemic shutdowns became more broad-based, some industries that experienced relatively moderate job losses in March saw substantially lower employment in April. In the construction industry, job losses were 19 times larger in April (-93,800) compared to March (-4,900). Similarly, April job losses in the manufacturing sector (-100,900) were three times larger than in March (-31,600). 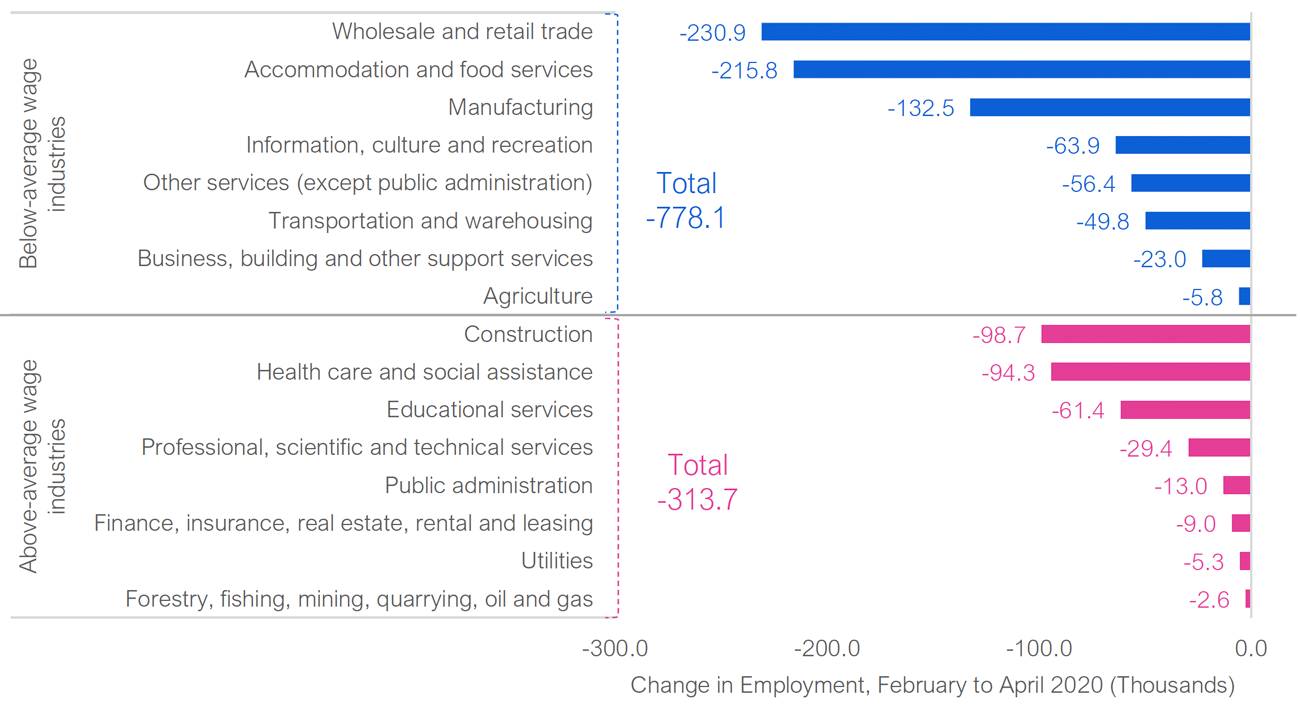 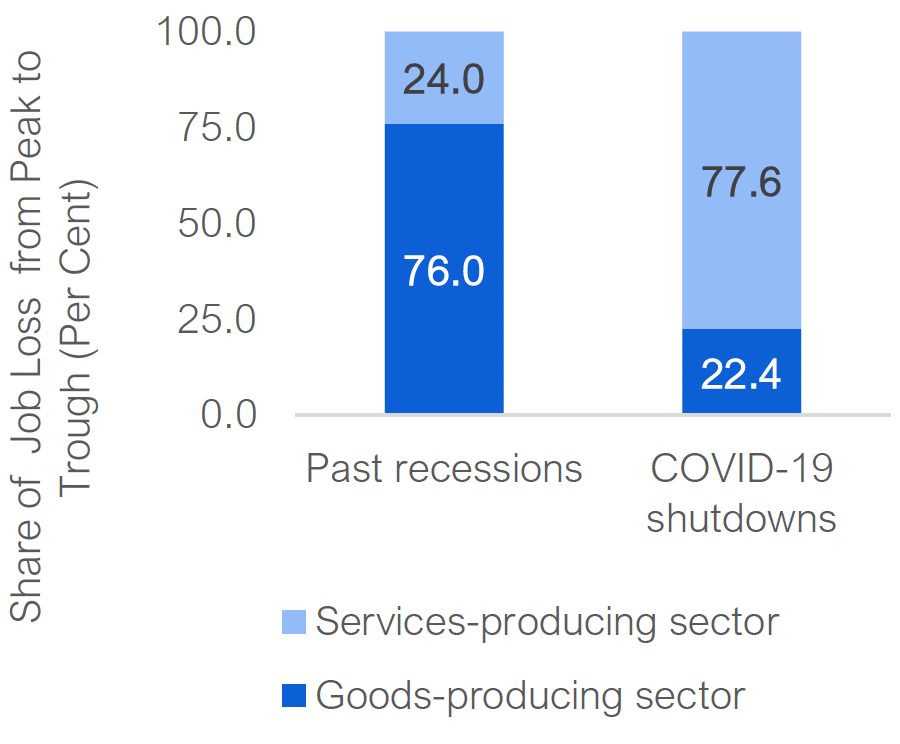 In contrast, industries that are more able to support employees working from home saw relatively smaller declines in employment. This includes workers in finance, insurance, real estate, rental and leasing (-9,000 jobs since February, or -1.5 per cent), public administration (-13,000, or -3.3 per cent), and professional, scientific and technical services (-29,400, or -4.3 per cent).

Historically, employment in the service sector has been more stable during recessions, in part because the demand for many services is less affected by the business cycle. On average, service sector employment in Ontario has accounted for just 24 per cent of job losses in the previous three major recessions (1981-1982, 1990-1991 and 2008-2009), despite representing nearly 70 per cent of all jobs. Goods-producing industries suffered 76 per cent of the drop in employment on average over the same recession periods.

However, because the current economic downturn has resulted from government-directed shutdowns, employment losses have been shared proportionally among goods and services industries.

Small Businesses Accounted for Bulk of Employment Decline Since February 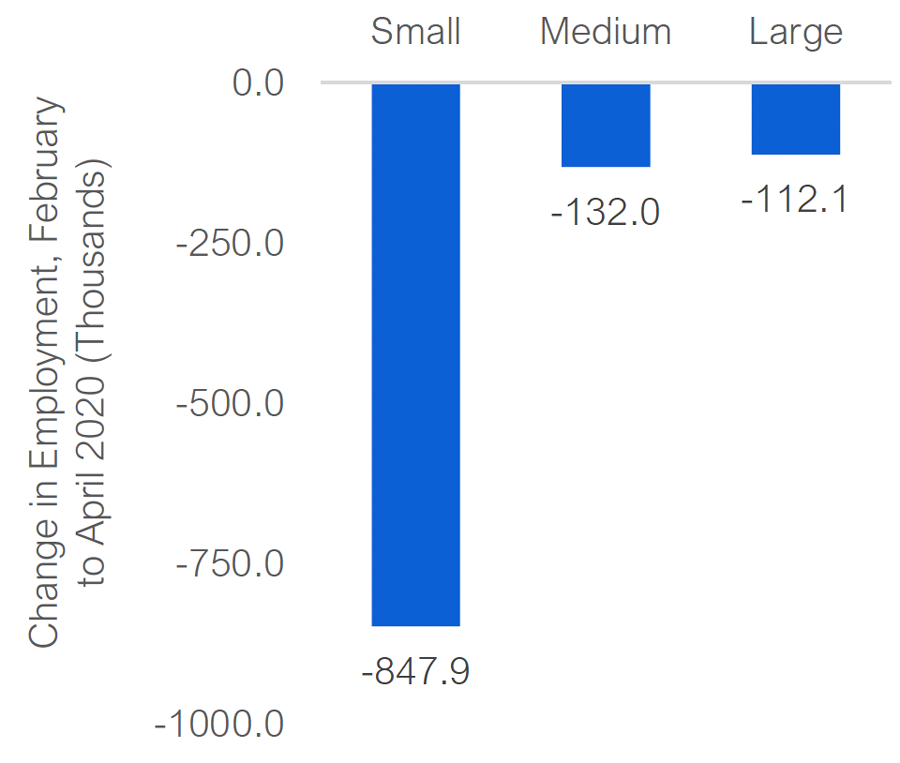 Employment in small businesses (with up to 99 employees) declined by 848,000 workers, or by 20.5 per cent from February to April 2020.[5] Small business job losses accounted for almost 78 per cent of the overall employment decline, much larger than its 62 per cent share of total employment.

The larger employment decline among small businesses likely reflects more limited access to credit and a lower capacity to adapt to the rapid changes caused by the COVID-19 pandemic, such as teleworking.[6]

April’s labour force report provides a fuller indication of the extent of the initial economic damage from the COVID-19 pandemic shutdowns, with an estimated 2.2 million Ontario workers affected. In the coming months, Ontario’s job market is expected to improve gradually as the economy is slowly reopened, although the pace may be uneven.

The Ontario government has released a framework for the staged reopening of the province and has also recently announced new steps to expand allowable sales for retail businesses.[7] These steps should facilitate a gradual return to work for many Ontario workers in the coming months. In addition, payments from the federal government’s Canada Emergency Wage Subsidy (CEWS) have begun which could help stem further job losses as well as encourage the re-hiring of previously laid-off employees.[8]

Statistics Canada’s May Labour Force Survey is scheduled to be released on June 5 and will provide employment results for the May 10 to 16 reference week. Following the release of the May employment data, the FAO plans to produce a report highlighting the impact of the pandemic shutdowns on employment across Ontario’s major regions and cities.

Snapshot of the Ontario labour market in April 2020

The infographic presents the following information:

The chart also presents Ontario’s largest monthly declines in jobs in past recessions.

[1] The Labour Force Survey (LFS) is conducted monthly by Statistics Canada and is based on a sample of about 15,000 Ontario households who are questioned about their employment status, hours worked, and income received. The LFS is the most closely monitored employment report in Canada because it is available quickly and on a frequent basis. The survey provides broad coverage of labour market information, including industry, demographic and regional data. The monthly data used in this report is seasonally adjusted, unless otherwise stated. Statistics Canada’s current Labour Force Survey was introduced in 1976.

[2] Individuals who have lost their job and decide not to search for work are not classified as unemployed and are not included in the labour force.

[3] Not adjusted for seasonality.

[6] The percentage of workforce teleworking or working remotely was higher on average among medium and large businesses compared to small businesses at the end of March 2020. See Statistics Canada, Table 33-10-0228-01.

[7] See A framework for reopening our province and Ontario Further Eases Restrictions on Retail Stores and Essential Construction During COVID-19.