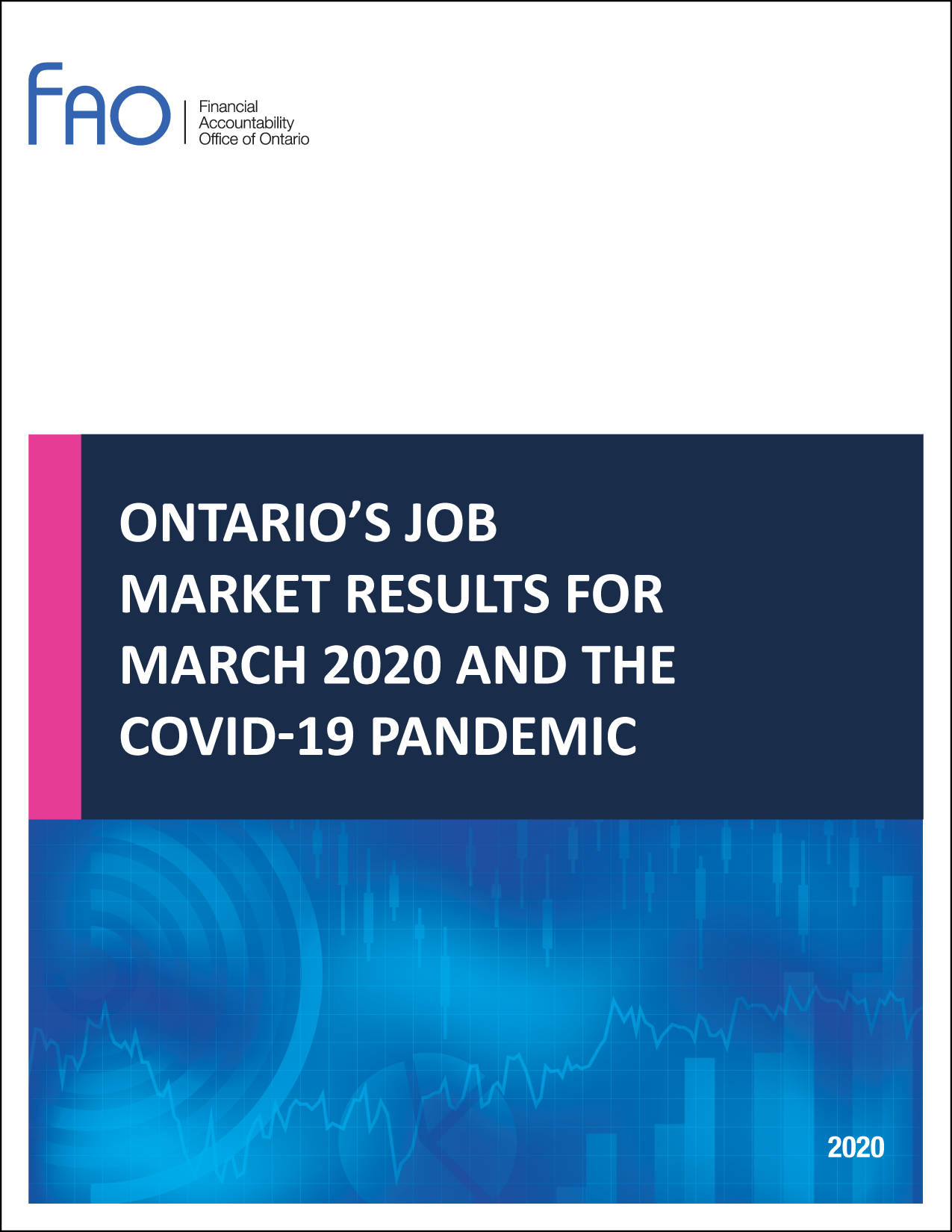 Snapshot of the Ontario Labour Market in March 2020

According to Statistics Canada’s Labour Force Survey, Ontario employment fell sharply in March, down a record 403,000 jobs (or -5.3 per cent). This decline was more than four times the previous largest single-month job loss of -95,700 (-1.5 per cent) recorded in January 2009. The collapse of employment in March brings the number of jobs in the province down to levels not seen since mid-2017.

Impact of the COVID-19 Pandemic on Employment

The dramatic deterioration in Ontario’s labour market in March reflects the impact of the COVID-19 pandemic which resulted in a broad, mandated shutdown of non-essential activity throughout the province beginning in mid-March and extending through April.[3] However, the labour market results in March stand in contrast to previous periods of sharp job losses. During past recessionary periods, significant declines in household spending, foreign exports and investment forced businesses to reduce production and employment. In the current downturn, businesses were directed to temporarily close their operations, forcing some of them to lay off employees.

The FAO estimates that about 1.2 million workers - representing nearly one in six jobs across the province - were directly affected by the shutdowns, through either job losses, temporary layoffs or sharply reduced hours. In addition to the net decline in employment of 403,000, the FAO estimates that nearly 500,000 more employees had essentially no hours worked, while a further 300,000 others worked less than half their usual hours during the reference week[4], largely due to COVID-19 related reasons.

Vulnerable workers were particularly hard hit by pandemic-related shutdowns. Temporary workers experienced job losses at a much higher rate (-14.0 per cent) compared to permanent employees (-5.6 per cent).[5] For young workers (ages 15-24), many of whom are employed in temporary or part-time positions, employment dropped sharply by 158,800 jobs (or -15.8 per cent).

Industries that are more likely to be able to support employees working from home experienced more modest employment declines in March, including professional and scientific services (-2,300), public administration (-3,300) and finance, insurance and real estate (-6,200).

Chart 2: Employment declined across most industries in March 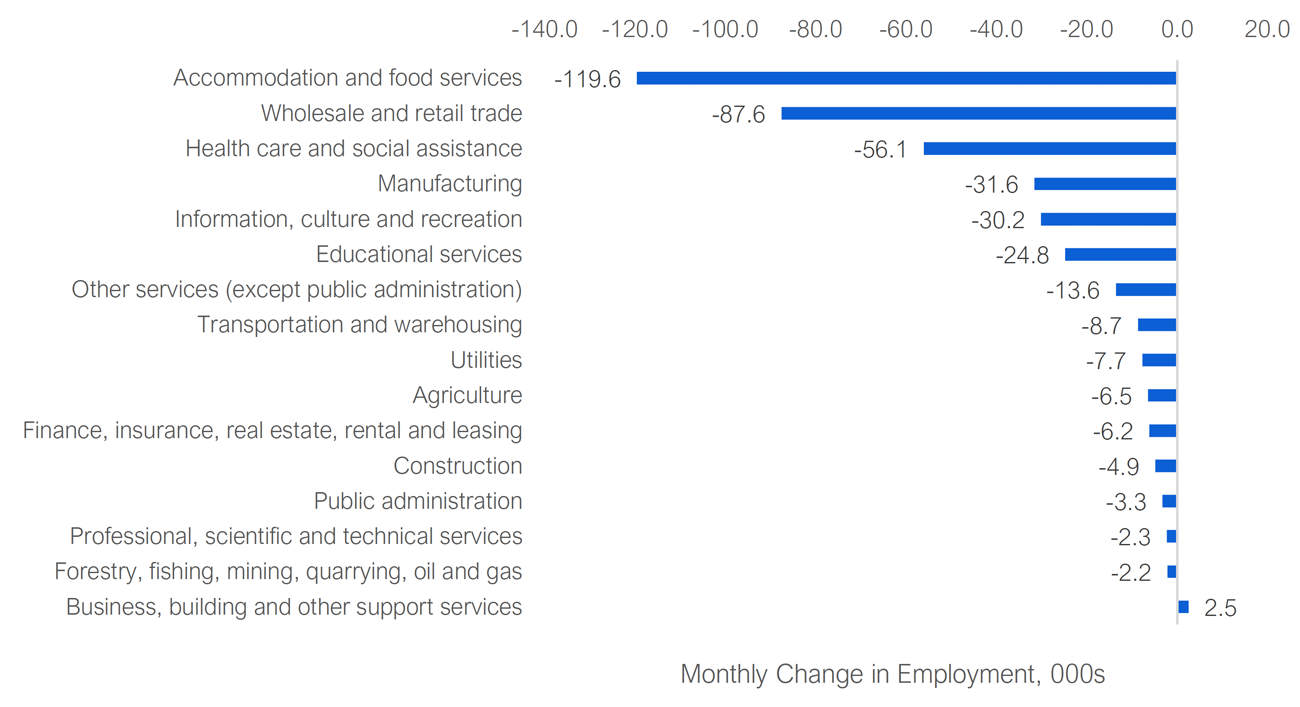 Nationally, Canadian employment dropped by 1 million workers (-5.3 per cent) in March, a record monthly job loss. The national unemployment rate rose sharply to 7.8 per cent, up from 5.6 per cent in February. All provinces experienced significant labour market impacts from the COVID-19 crisis in March, with Quebec (-6.0 per cent) and British Columbia (-5.2 per cent) posting large employment declines and sharp increases in unemployment rates.

Chart 3: Unemployment rate increased in almost all the provinces

Actions taken by the federal and provincial governments during the COVID-19 crisis are expected to provide support for labour markets going forward. However, at the same time, the on-going containment measures to stem the spread of the COVID-19 virus will continue to negatively affect employment in the months ahead.

Statistics Canada’s next Labour Force Survey is scheduled for release on May 8 and will likely report additional significant job losses occurring in April. Some Ontario industries that experienced relatively small job losses in March have been more severely affected by recent measures to further restrict activity, likely leading to lower employment in April. However, the new Canada Emergency Wage Subsidy program may encourage some employers to rehire workers.

Timeline of provincial measures responding to the COVID-19 pandemic

Although job losses were anticipated to be severe in the early stages of the pandemic, most economic forecasters expect employment to recover as restrictions related to COVID-19 crisis are eased in the coming months.

The Financial Accountability Office (FAO) will be releasing an economic and budget outlook report in May which will incorporate the economic and fiscal impacts of the COVID-19 pandemic as well as government policies responding to the crisis.

Snapshot of the Ontario Labour Market in March 2020

The infographic presents the following information:

The chart also presents Ontario’s largest monthly declines in jobs in past recessions.

Chart 2: Employment declines across most industries in March

Timeline of provincial measures responding to the COVID-19 pandemic

[1] The Labour Force Survey (LFS) is conducted monthly by Statistics Canada and is based on a sample of about 15,000 Ontario households who are questioned about their employment status, hours worked, and income received. The LFS is the most closely monitored employment report in Canada because it is available quickly and on a frequent basis. The survey provides broad coverage of labour market information, including industry, demographic and regional data. The monthly data used in this report is seasonally adjusted, unless otherwise stated. Statistics Canada’s current Labour Force Survey was introduced in 1976.

[2] Individuals who have lost their jobs and decide not to search for work are not classified as unemployed and are not included in the labour force.

[3] For a timeline of measures related to the COVID-19 pandemic in Ontario, see page 5.

[5] Not adjusted for seasonality.