Posted in: Budgets, Economy, Government Spending, Taxes and Other Revenue

Ontario’s economy expanded rapidly in 2021 and 2022 as the province recovered from the pandemic. However, Ontario’s economic growth is projected to slow sharply in 2023, reflecting the impact of higher interest rates, ongoing inflation and the weaker global environment. Real GDP growth of 3.3 per cent is projected for 2022, slowing to just 0.7 per cent in 2023, then stabilizing at 1.9 per cent over the rest of the outlook.

With a strong economy driving extraordinary revenue growth, the Province recorded a $2.1 billion budget surplus in 2021-22. While revenue growth is projected to slow from its current pace, it will continue to outpace program spending increases over the FAO's outlook, leading to growing budget surpluses from $0.1 billion in 2022-23 to $8.5 billion in 2027-28. These surpluses are a substantial improvement compared to the deficits forecast in the 2022 Ontario Budget.

In 2021-22, Ontario recorded a budget surplus of $2.1 billion – the ninth surplus since 1981-82. This surplus was a sharp reversal from the deficits projected by both the FAO and the government.[1] The 2021-22 budget surplus primarily reflected extraordinary growth in revenue,[2] as strong employment growth and high inflation pushed up incomes, household spending and tax revenues.[3]

The FAO projects budget surpluses growing from $0.1 billion in 2022-23 to $8.5 billion by 2027-28. While revenue growth is projected to slow from its current pace, the FAO projects that it will continue to outpace program spending increases over the outlook under current policies. These surpluses are a substantial improvement compared to the deficits forecast in the 2022 Ontario Budget.

Figure 2.1: The FAO is projecting growing budget surpluses over the outlook

Note: The budget balance from the 2022 Ontario Budget is shown before the reserve.

However, if the government makes future announcements, such as new tax cuts, spending initiatives or a combination of both, the FAO’s budget projection would deteriorate. There are also significant downside risks to the economic outlook that could negatively affect Ontario’s fiscal outlook.

In the FAO's projection, ongoing budget surpluses would slow the accumulation of net debt over the outlook. As net debt grows slower than the rate of nominal GDP growth, Ontario’s net debt-to-GDP ratio is projected to decline to 31.5 per cent by 2027-28. This would mark the lowest ratio since 2008-09 and is 7.6 percentage points below the projection in Ontario’s 2022 budget. 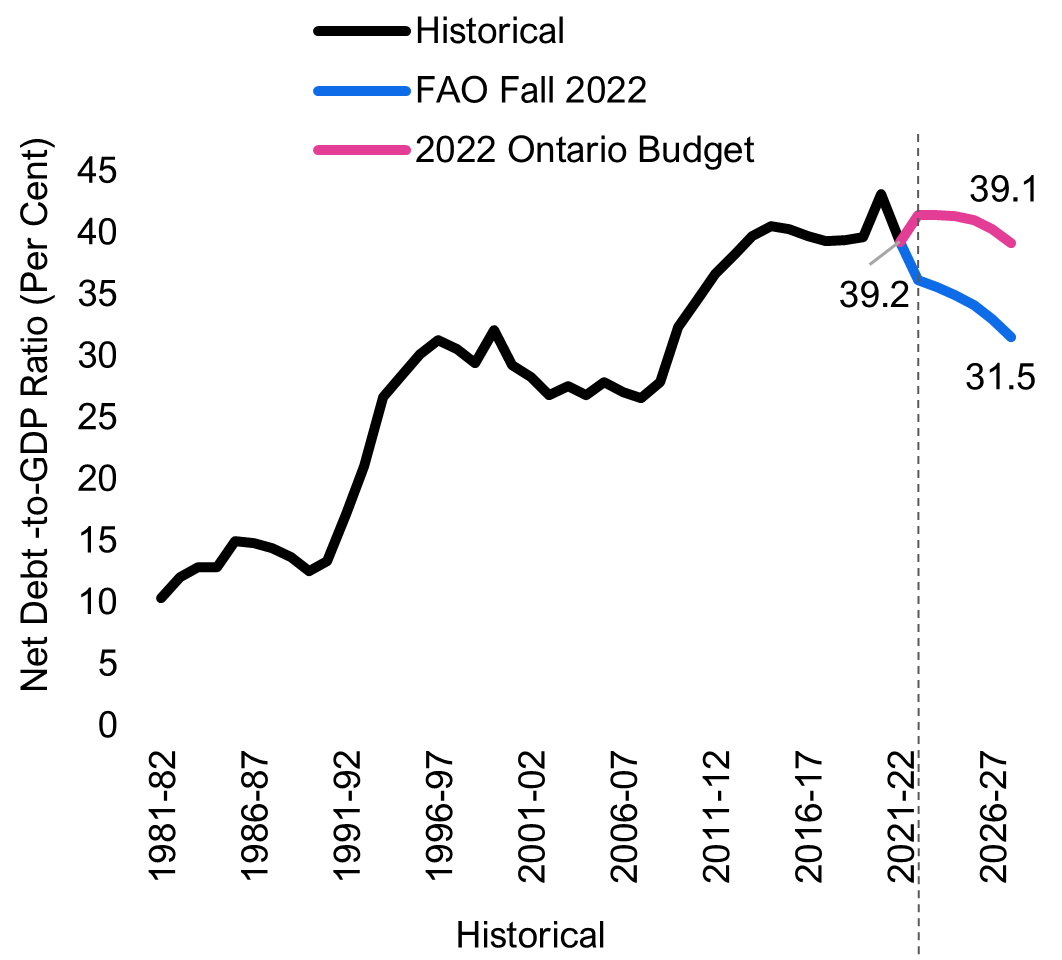 Ontario’s interest payments declined from 7.4 per cent of total revenue in 2020-21 to 6.8 per cent in 2021-22, reflecting in part very strong growth in total revenues.

Over the outlook, ongoing budget surpluses mitigate the impact of rising interest rates on Ontario’s debt expense.[5] As a share of revenue, debt interest payments are projected to decline further to 5.8 per cent in 2027-28, the lowest share on record back to the early 1980s and 1.7 percentage points below the projection in Ontario’s 2022 budget. 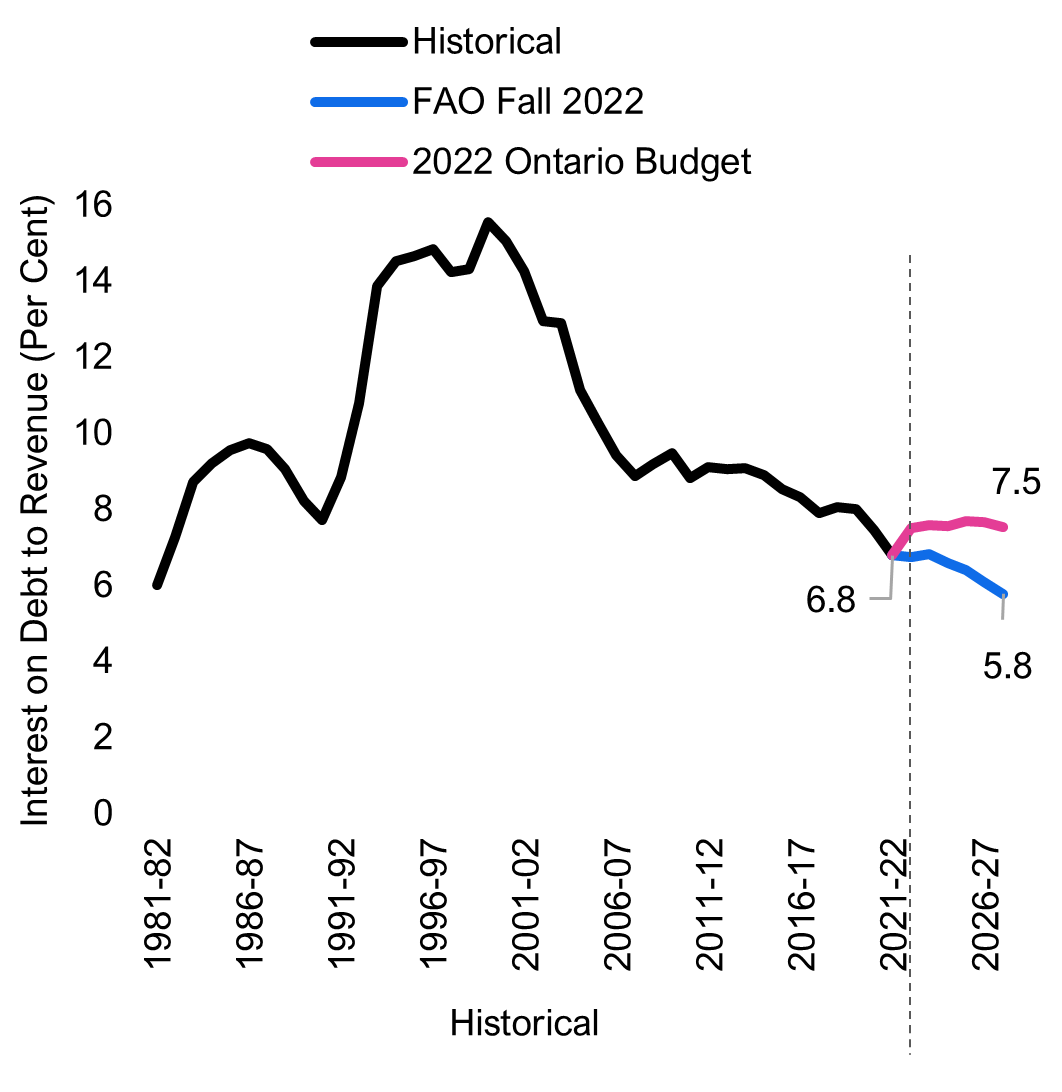 Note: 2022 Ontario Budget revenues in 2021-22 were estimates at the time of the budget’s release.

Revenues are projected to grow at an average annual rate of 3.5 per cent over the 2022-23 to 2027-28 period, as increases in nominal GDP, the main driver of revenues, moderates in response to reduced household purchasing power and higher interest rates.

The FAO’s revenue projection is significantly higher than the 2022 Ontario Budget outlook. This is primarily due to the exceptional increase in 2021-22 revenue, which was $11.5 billion higher than projected in the budget. By 2027-28, this gap narrows to $6.5 billion, reflecting the FAO’s weaker projected economic growth relative to the budget.

The FAO’s revenue outlook is consistent with the economic outlook in Chapter 5, which projects a significant slowdown for Ontario’s economy in 2023 but does not anticipate a recession. However, numerous downside risks exist to the economic outlook that could negatively impact future revenue growth.

FAO’s program spending projection is lower than the government’s until 2024-25, but higher over the following three years

Figure 4.1: FAO’s program spending projection is lower than the government’s until 2024-25, but higher over the following three years

Source: Ontario Public Accounts and FAO analysis of the 2022 Ontario Budget and information provided by the Ministry of Finance.

Compared to the FAO’s spending projection, the spending plan outlined in the 2022 Ontario Budget contains funding shortfalls across all program sectors. These shortfalls, which exclude unallocated contingency funds, total a combined $40.0 billion over the six-year period from 2022-23 to 2027-28. By sector, the largest shortfall is in health ($23.4 billion over six years), followed by education ($6.0 billion), children’s and social services ($4.3 billion), postsecondary education ($2.7 billion), justice ($2.3 billion) and ‘other programs’ ($1.4 billion).

The global economic outlook has weakened

After the global economy grew by 6.0 per cent in 2021, both the International Monetary Fund (IMF) and the Organisation for Economic Co-operation and Development (OECD) are projecting that growth will slow in 2022 to around 3.0 per cent.[10]

For 2023, the OECD’s September outlook lowered expectations for global economic growth to 2.2 per cent, with notable weakness in the Euro area, the United States and Canada.[11] The IMF’s downgraded projection expects global growth of 2.7 per cent in 2023.[12]

Figure 5.1: The OECD lowered its global economic outlook for 2023 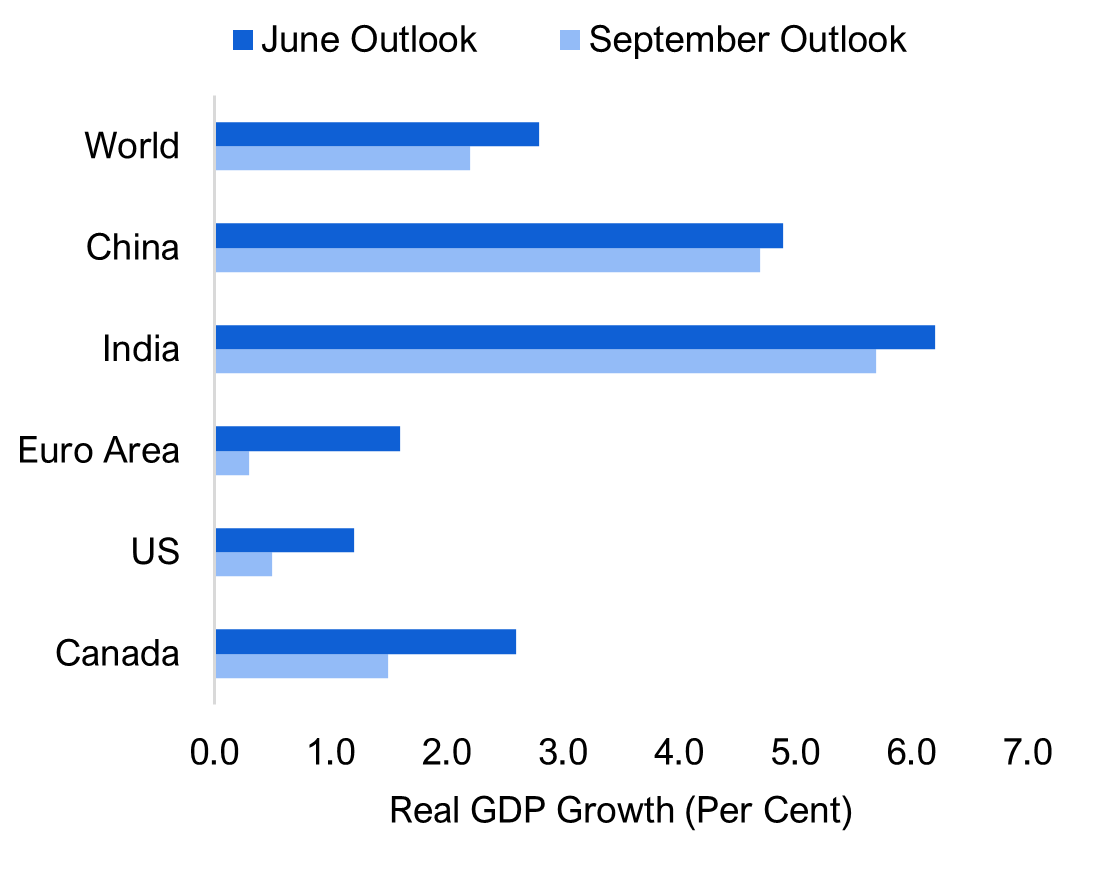 Many countries have seen rapid increases in the cost of living beginning in 2021. Supply chain challenges, regional COVID-19 related lockdowns in China, and high demand for goods and services (supported by government stimulus spending and historically low interest rates) have all contributed to rising costs globally. In addition, the war in Ukraine has caused energy prices in Europe to soar and fueled a steep rise in global food prices, aggravating inflationary pressures.

Ontario’s annual average inflation rate is expected to reach a 40-year high of 6.8 per cent in 2022, reflecting rapid price increases for many components of the consumer price index (CPI), especially food, energy and shelter. Inflation is expected to trend lower in 2023, as higher interest rates slow demand and supply chains improve, alleviating shortages. As supply and demand factors become better balanced, inflation is expected to settle close to historical averages by 2024.

Figure 5.2: Higher inflation projected in Ontario over the next two years 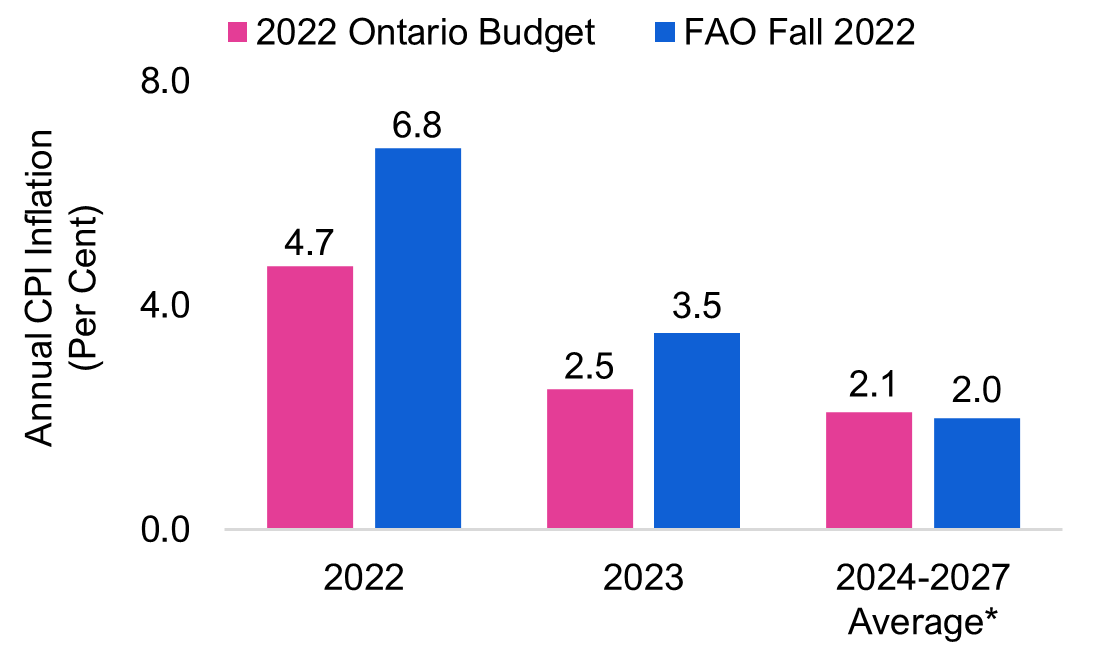 High inflation has caused the Bank of Canada to aggressively raise its policy interest rate in 2022 from 0.25 per cent to 3.25 per cent in September, the highest since April 2008.

The FAO expects interest rates will continue to rise, with the Bank of Canada increasing its policy interest rate to 3.75 per cent by the end of 2022. In line with most private sector economists, the FAO projects that short-term interest rates will rise higher than long-term rates in 2023, which has historically indicated the possibility of slower economic growth. 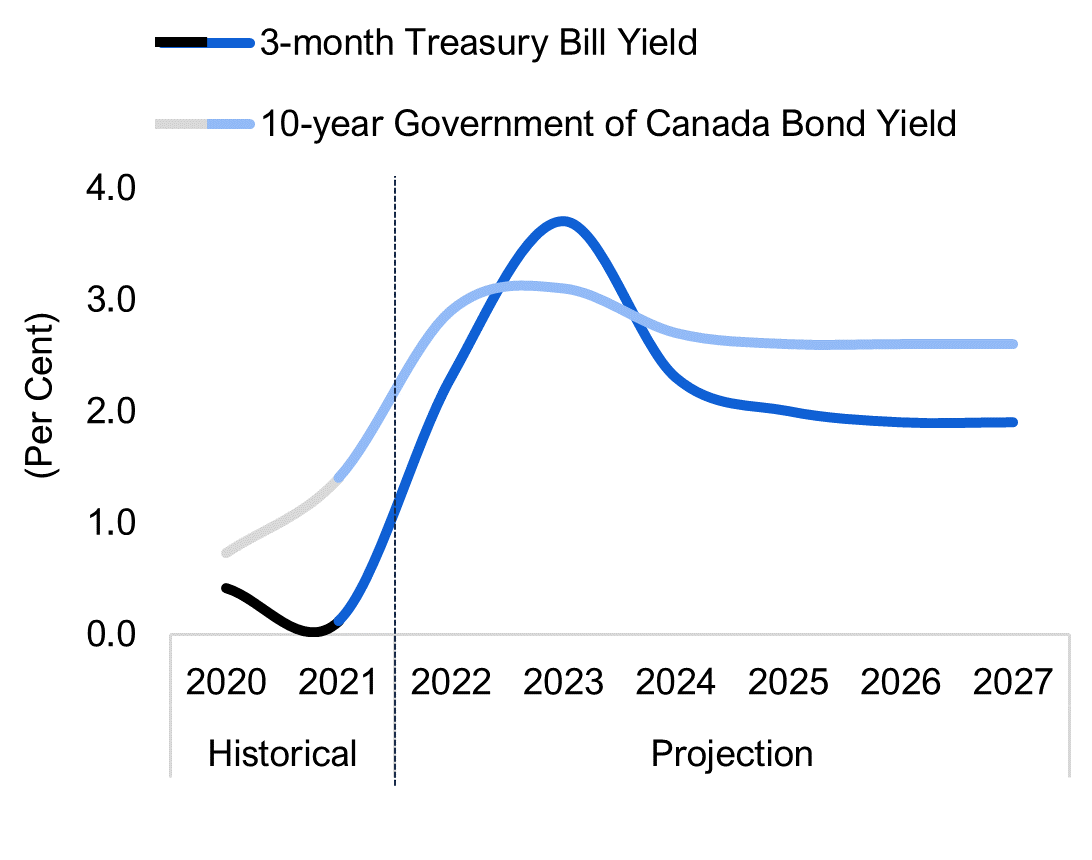 However, the pace of Ontario’s economic growth is projected to slow sharply to 0.7 per cent in 2023, reflecting the impact of higher interest rates, ongoing price pressures and the weaker global environment. While this updated outlook is significantly weaker than projected in the 2022 Ontario Budget, the FAO is not currently projecting a recession[13] in Ontario.

Figure 5.4: Ontario’s economic outlook has deteriorated since the spring 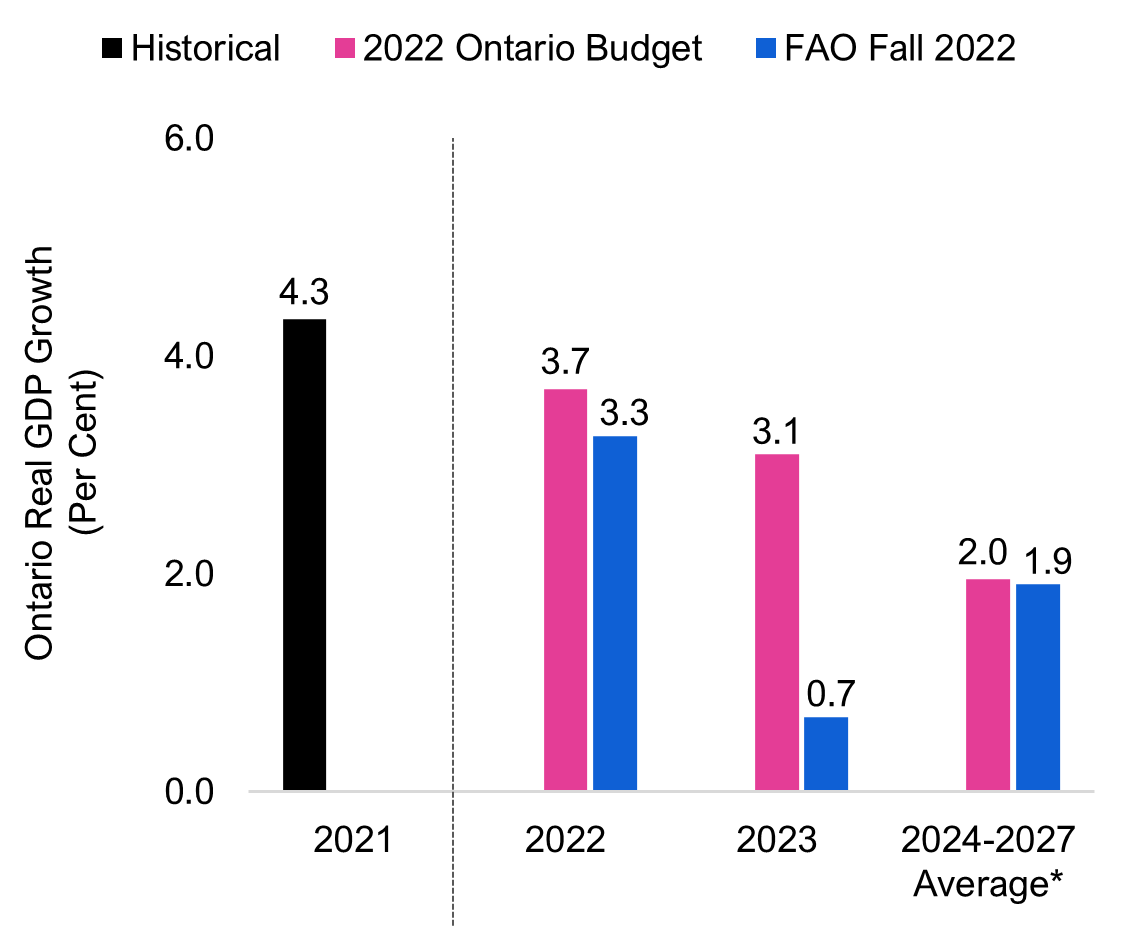 However, there are notable downside risks to the economic outlook. High inflation could persist, further eroding household purchasing power, despite excess savings built up during the pandemic. The rapid interest rate increases have already triggered a correction in the housing market, and the impacts on the broader economy could be more significant than expected. The unpredictability of Russia’s war in Ukraine and further pandemic-related shutdowns in China could disrupt global markets, add to inflationary pressures, and slow economic growth more than anticipated.

Ontario’s labour market is on pace to record another year of strong growth in 2022, pushing the annual unemployment rate down to an expected 5.7 per cent, similar to the rate prior to the pandemic. 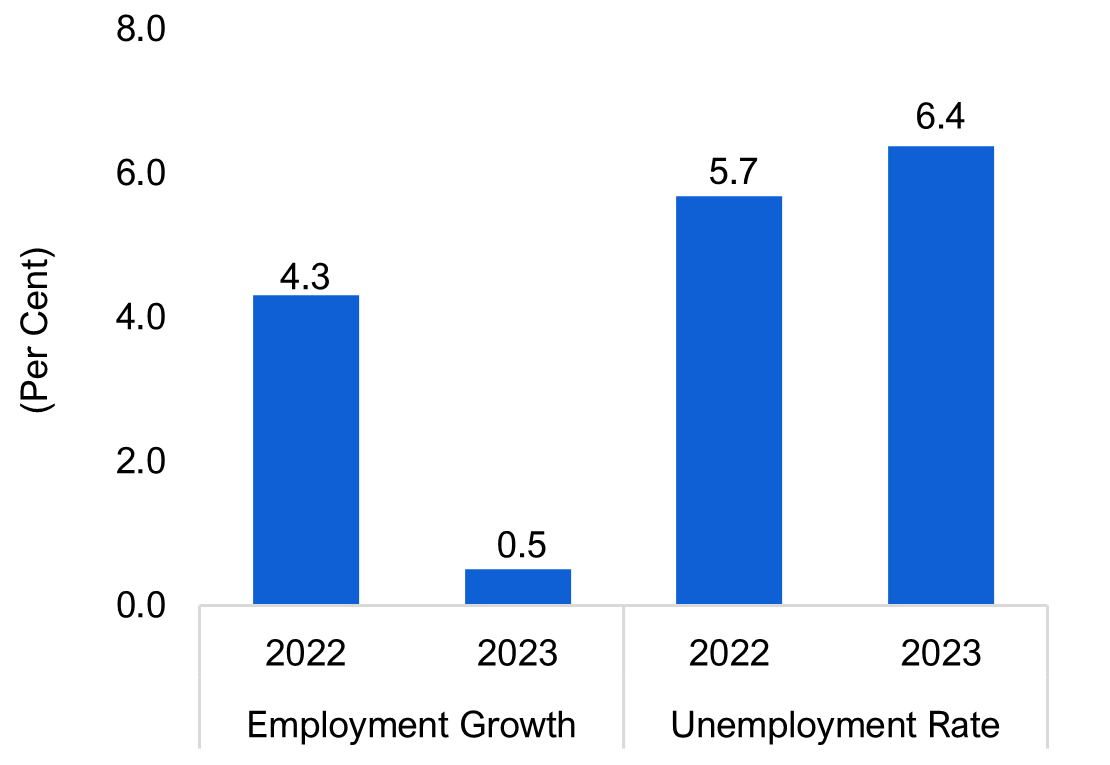 Ontario’s nominal GDP, which provides a broad measure of the tax base, has rebounded rapidly following the reopening of the economy in mid-2020. The level of nominal GDP has risen well above the FAO’s pre-pandemic trend projection due to the acceleration in economy-wide prices. This is the primary driver of the large upward revisions to Ontario revenue growth over the past year, as tax rates are applied to significantly higher levels of economic activity. 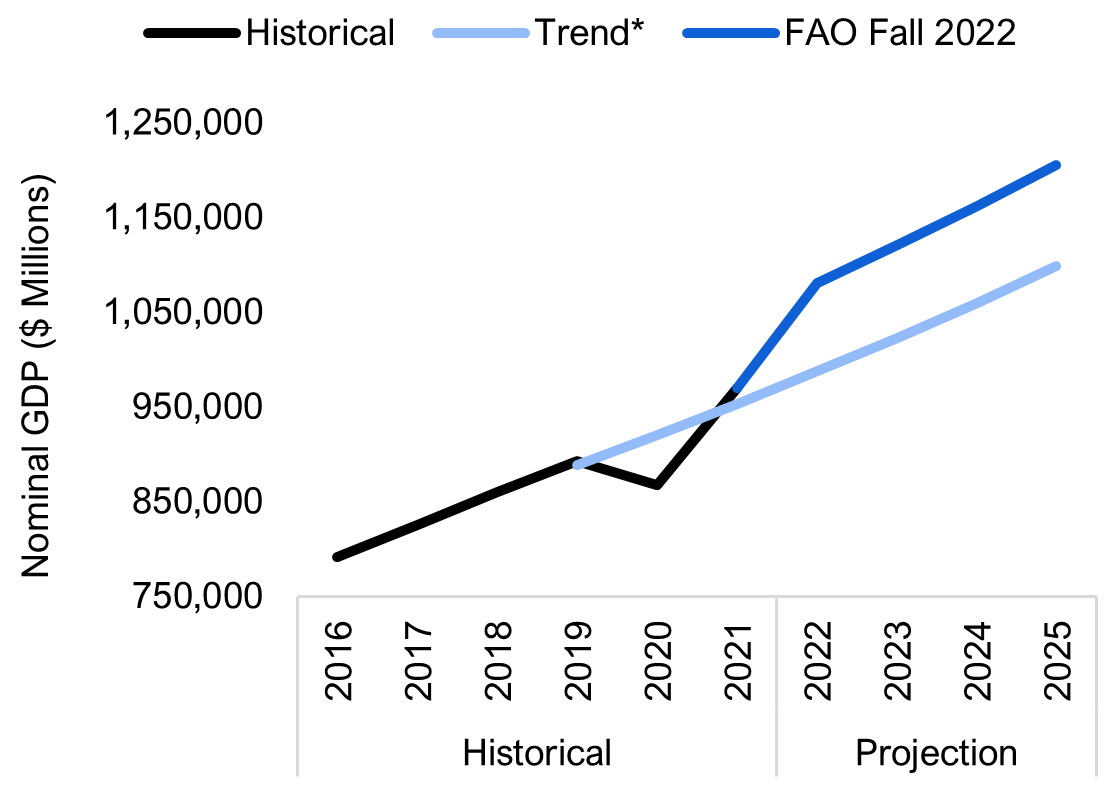 * The pre-pandemic trend is the projection from the 2019 Fall EBO.

The content of this report is based on information available to October 12, 2022. Background data used in this report are available upon request.

In keeping with the FAO’s mandate to provide the Legislative Assembly of Ontario with independent economic and financial analysis, this report makes no policy recommendations.

[2] Total revenue grew by $20.2 billion (12.2 per cent) in 2021-22, while program spending increased by only $1.4 billion (0.8 per cent), as higher base program spending was largely offset by a decline in temporary COVID-19-related spending. See Ontario Public Accounts: Annual Report and Consolidated Financial Statements 2021–2022, pages 22 and 51.

[4] See Chapter 5 for a discussion of nominal GDP growth, which has been exceptionally strong in 2021 and 2022.

[5] The impact of rising rates on interest on debt payments is also mitigated in part by the term structure of Ontario’s debt, which in 2021-22, had an average term to maturity of 10.9 years. See 2022 Ontario Budget, page 213.

[6] See Public Accounts 2021-22, page 7. Total revenue in 2021-22 was $185.1 billion, or 5.0 per cent higher than the FAO’s spring forecast, and 6.6 per cent higher than forecast in the 2022 Ontario Budget. This revenue surprise was not unique to Ontario. Based on an analysis of the 2021-22 public accounts of seven provinces, the FAO estimates that actual 2021-22 revenues averaged 5.3 per cent higher than budget projections made earlier in the year.

[8] As a general point of comparison, population and inflation are expected to increase by a combined average annual rate of 4.2 per cent over this period.

[9] Contingency funds are typically used to support existing programs with funding shortfalls, fund new programs or enhance existing programs. Alternatively, if the Province decides not to use the contingency funds, then these funds are applied to improve the budget balance and reduce the Province’s net debt. The Auditor General of Ontario noted that the $19.4 billion in contingency funds over the first three years of the outlook was significantly larger than any three-year amount set aside in previous Ontario budgets. For more information, see Office of the Auditor General of Ontario, Review of the Pre-Election 2022 Multi-Year Fiscal Plan.

[11] Similarly, in its July outlook, the IMF made a 0.7 per cent downward revision to global economic growth in 2023.