Ontario on Track for Stronger than Projected Economic Growth in 2015

On January 15, the Ministry of Finance released its quarterly Ontario Economic Accounts (OEA) report, showing that the province’s economy posted relatively strong economic growth in the third (July to September) quarter of 2015. Ontario real GDP increased 3.5% (annualized) in Q3, the strongest gain in a year.

Importantly, third quarter growth was broad-based, with household spending, business investment, and net exports all contributing to the overall increase – a positive sign for potentially stronger and more balanced economic growth in 2016.

In current dollars, Ontario nominal GDP increased by a robust 1.3% (5.4% annualized) in Q3, after gains averaging 0.7% over the first two quarters. Nominal GDP is the best single measure of the government’s tax base.

Looking at Ontario’s economic growth on a year-to-date basis in 2015 – that is, comparing the first three quarters of 2015 to the same period in 2014 – provides a good prediction for the full year performance of the economy.[1] 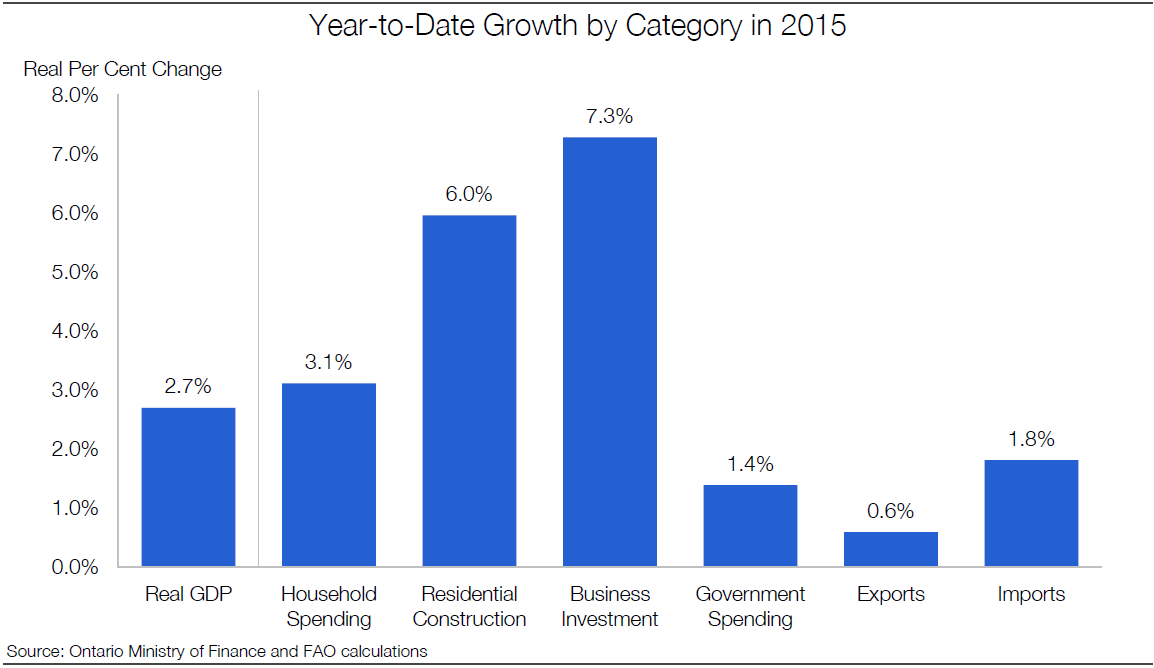 Based on the updated OEA data, it appears that household spending and residential construction were primary drivers of Ontario’s economic growth last year.  Business investment in plant and equipment also grew strongly in 2015, but the export sector continued to underperform the rest of the economy.

Importantly, the data also suggest that the province is likely on track to overachieve on the Fall Economic Statement[4] projections for both real and nominal GDP growth in 2015.[5] In fact, if nominal GDP were to increase by a reasonable 1.0% in the fourth quarter, growth for 2015 as a whole would be 3.6%, above the government’s November projection of 2.9%.  As a result, the government is likely to report a somewhat higher projection for both 2015 GDP and revenues, compared to the Fall Statement, when it releases its 2016 Budget later this year.

[1] The Ministry of Finance will typically release the 4th quarter OEA in mid-April, which will include the first estimate of 2015 annual growth.

[3] Labour income is referred to as ‘compensation of employees’ in Statistics Canada’s economic accounts. Similarly, the ‘net operating surplus of corporations’ in the economic accounts are largely equivalent to corporate profits.

[5] The much stronger outlook for annual 2015 growth since the Fall Economic Statement is largely the result of significant upward revisions by Statistics Canada to growth over the first half of 2015 as well as in 2014.

Year-to-Date Growth by Category in 2015
This bar chart shows Ontario’s economic growth in the first three quarters of 2015. It shows that Real GDP has risen 2.7 per cent with growth across all categories, led by a 7.3 per cent rise in Business Investment. Residential Construction has risen by 6.0 per cent, Household Spending by 3.1 per cent, Imports by 1.8 per cent, Government Spending by 1.4 per cent and lastly, Exports by 0.6 per cent.